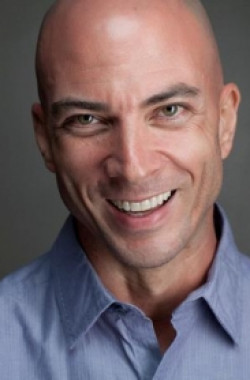 John Joseph DiRenzo (born 1968) is an American actor, filmmaker and culinary professional. He was born and raised in Norristown, Pennsylvania, and is the son of Lena (Pergine), a housewife, and Nicholas A., a butcher and food market owner. His ancestry is Italian (mother) and Italian (father). John found his love for entertainment at an early age. In his early teens John was a marching, concert and stage band percussionist at Norristown Area High School and graduated in 1986. During his adolescent years, John remained in school music studies and began performing with local garage bands. In his early 20's John worked as a night club lighting tech and disc jockey performing at Philadelphia area venues. Johns career as a professional actor began at age 43 appearing as a background performer in the feature film After Earth (2012). John is a SAG ( Screen Actors Guild ) union member . Since his start in 2012 John has worked on projects including short films, feature films, television, commercials, print and voice over productions. John has credits as an professional actor, stand-in, executive producer, producer, assistant director, and casting associate. John has worked on print modeling projects with west coast photographer Brian Kuhlmann and world renown portrait photographer Annie Leibovitz.

In 2014 John starred in Friends from the Neighborhood, the story of an undercover police detective who infiltrates an organized crime operation. Once inside he discovers the boss of the operation is a childhood friend from the neighborhood.

In 2014 John had a supporting role in One Night at Dante’s, the story of the fictionalized accounts of true events behind the double murder that took place in a Philadelphia night club in 1964 - Dante's Infrerno.

In 2015 John starred in Deadly Gamble, the story of a degenerate gambler who has nothing left, so he puts his loved ones on the line and borrows money from the mafia for one last run of luck.

In 2016 John starred in Variety, the story of what happens when a young man from Russia winds up working at the Jersey shore.

In 2017 John starred in and executive produced The Listing, the story of Michael Mourer, a family man and a successful Realtor. However his current listing could be his last as he is unexpectedly black mailed with a harsh time restraint.

In 2017 John had a starring role in and in part produced the television series Chase Street, the story of Camden, NJ, the county seat of Camden County, NJ and a city abandoned- by the state, employers, and its middle-class white residents and suburban neighbors-its people left to fend for themselves and caught in a vortex of drugs and political corruption.

In 2018 John starred in a short film titled Circles, the story of two men who pontificate on existence and the balance of fate and free will.

John is a culinary professional with over 35 years in the grocery, produce, fresh meat, restaurant business and is an experienced chef, butcher, bartender and restaurant consultant. From Oct 2016 – March 2020 John worked as a guest host on the QVC shopping networks presenting products for kitchen and cookware companies live on the QVC television networks. John’s culinary journey began at age 10 in his hometown Norristown, Pa working along side his father, mother and siblings in the family's food markets, butcher shops and restaurants located throughout the Philadelphia suburbs from the early 1960’s through 2008. At an early age John learned the art of meat cutting working as an apprentice butcher. As a young child and teen John spent the majority of his time working in the family markets.